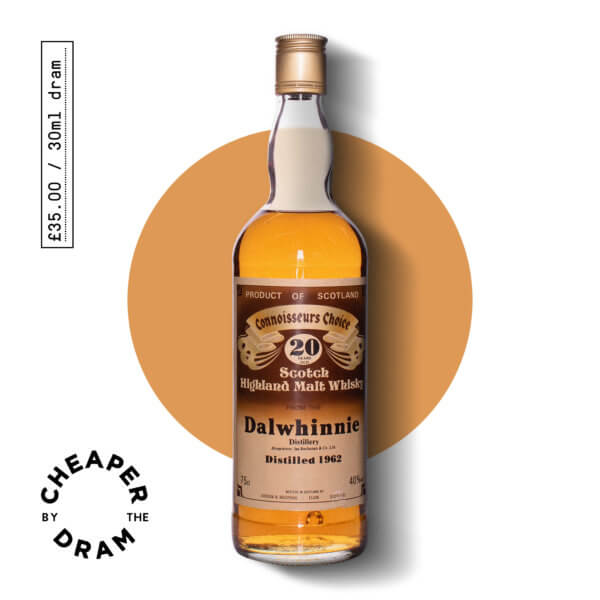 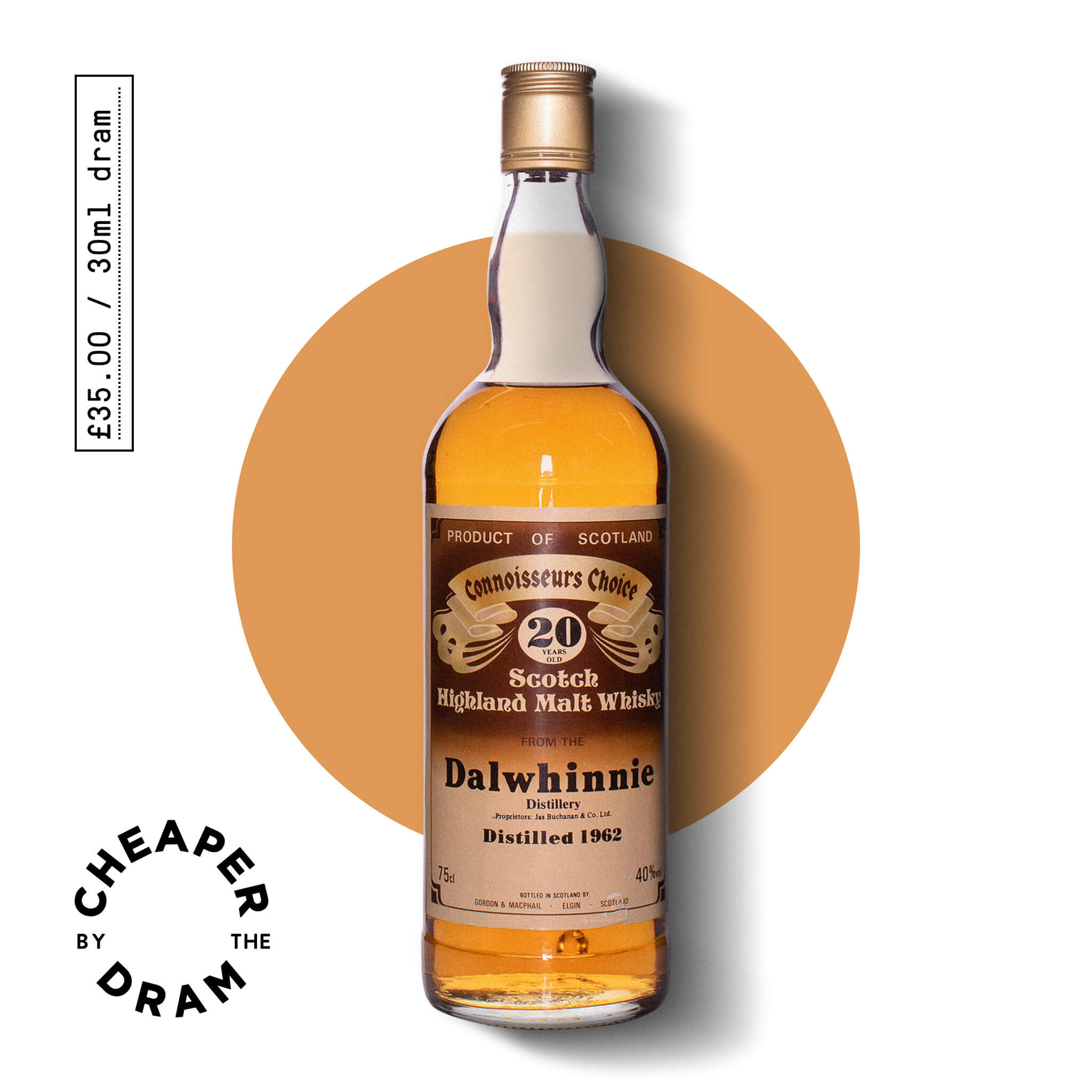 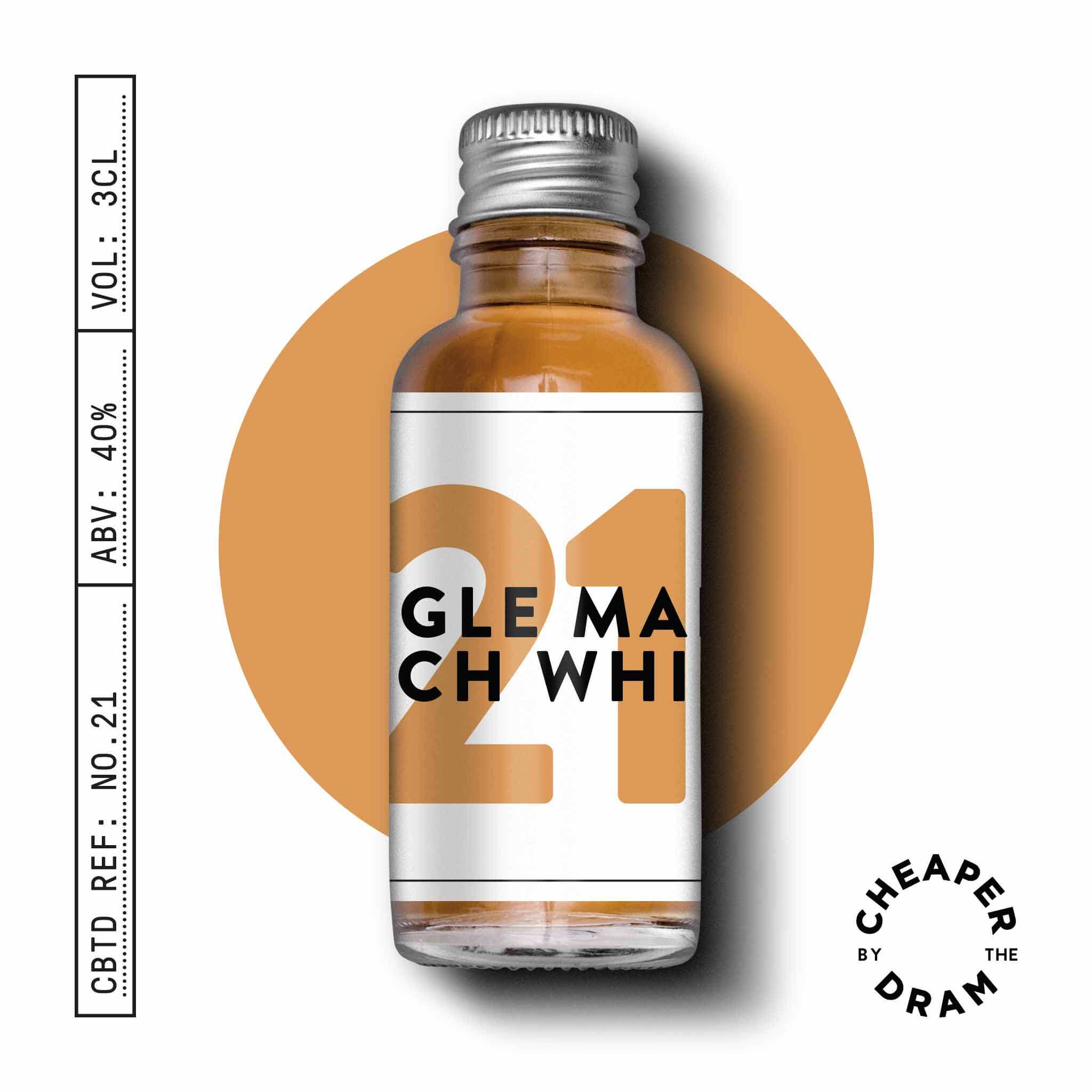 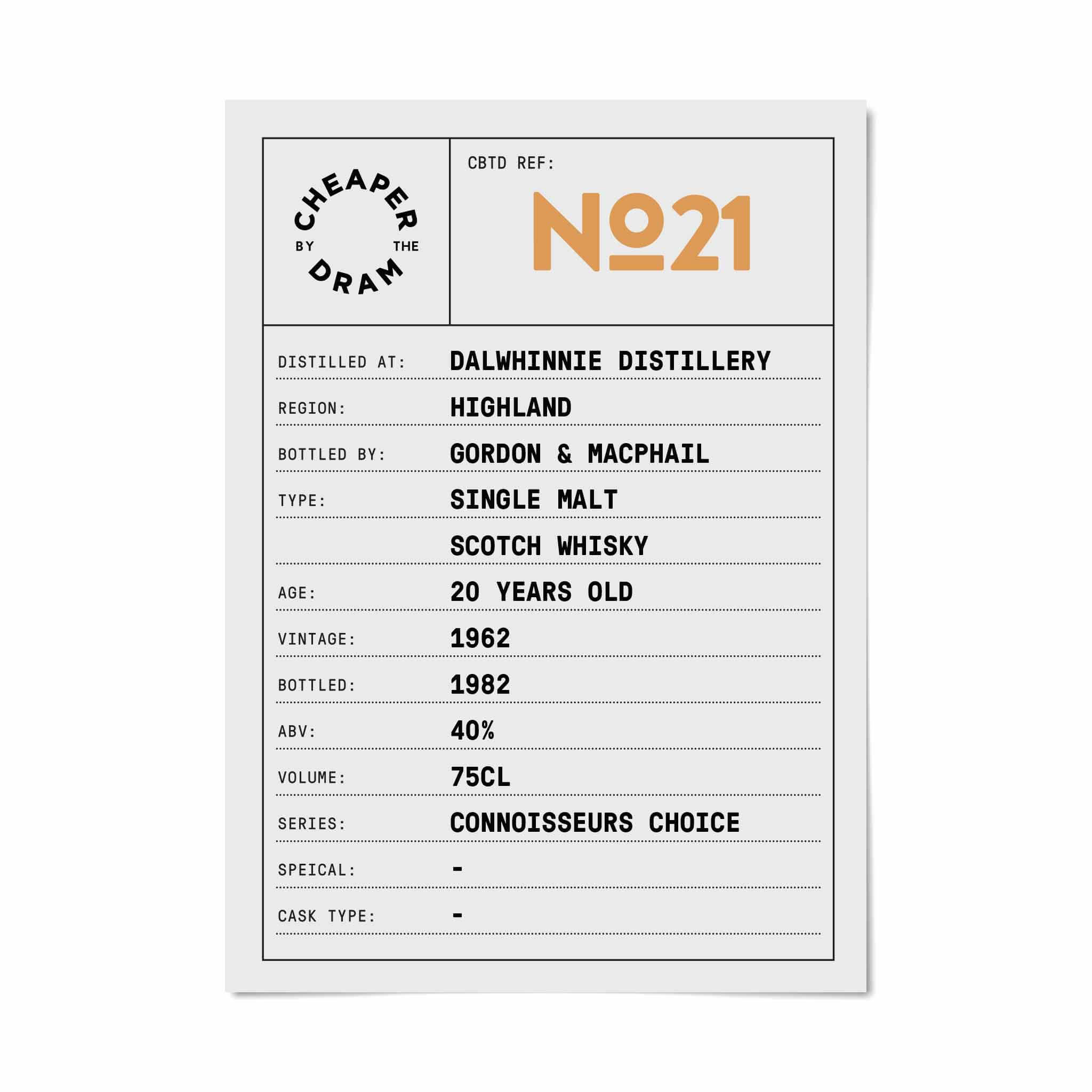 The 20-year-old single malt in this dram was distilled in 1962 by Dalwhinnie Distillery, and bottled by Gordon & MacPhail in 1982 as part of their Connoisseurs Choice range.

The 20-year-old single malt in this dram was distilled in 1962 by Dalwhinnie Distillery, and bottled by Gordon & MacPhail in 1982 as part of their Connoisseurs Choice range.

Distilled in 1962 at the Dalwhinnie Distillery the whisky in CBTD REF NO.21 was bottled at 20 years old as part of the icon brown label Connoisseurs Choice series released in the 80s by Gordon and Macphail.

The single malt whisky in CBTD REF NO.21 was distilled in a year which saw an escalation of tensions between the USA and Soviet Union in the Cuban Missile Crisis, artist Andy Warhol premiered his Campbell’s Soup Cans exhibit, and the first film in the James Bond franchise, Dr No. was released in cinemas.

A distillery was first established in the Highland village of Dalwhinnie in 1897 by three local businessmen, John Grant, Alexander Mackenzie and George Sellar, originally bearing the name Strathspey. The distillery commenced production in February 1898, although after just a few months the venture failed and by October 1898 the founders were forced to sell to AP Blyth & Son and John Somerville & Company who changed the distillery’s name to Dalwhinnie. In 1905, Dalwhinnie was sold again to American distillers Cook & Berheimer, gaining the distinction of being the first Scottish distillery to be owned by a non-UK company, and the first distillery to have a US-based owner. As a result of Prohibition, Dalwhinnie would change ownership again and was eventually acquired by Distillers Company Limited (later Diageo) in 1926. Under DCL’s ownership Dalwhinnie was licenced to James Buchanan creator of the Black & White blend; Dalwhinnie’s malt output remains a core part of the blend, and the distillery has become Black & White’s spiritual home

In 1988, Dalwhinnie was chosen as the Highland representative and one of the founding whiskies in the United Distillers Classic Malts selection. Dalwhinnie’s distillery character is lightly peated combining clear sweet flavours of cut grass and heather honey.

ABOUT THE CONNOISSEURS CHOICE RANGE

This 1962 distilled Dalwhinnie single malt was aged for 20 years then released by independent bottler Gordon & MacPhail as part of their Connoisseurs Choice range. First created by George Urquhart in 1968, Connoisseurs Choice aimed to showcase small batch examples of single malt in a market focused entirely on blended whiskies. The Connoisseurs Choice range pioneered a new category in the whisky market by selecting, maturing and bottling whisky from distilleries, many of which had never before been bottled as single malt, according to the belief every distillery has a unique personality to collect a range of rare and sought after single malts from some of Scotland’s long established distilleries. The distinctive brown label identifies this bottling as a Connoisseurs Choice release dating from the 1980’s. As Dalwhinnie now uses grain produced by specialist maltsters since ceasing the distillery’s own grain malting in 1968, this dram distilled in 1962 will take the drinker back to Dalwhinnie’s past incarnation. 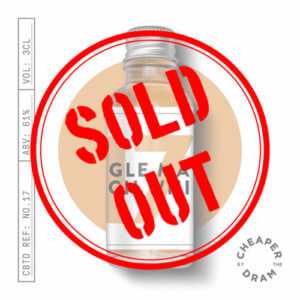 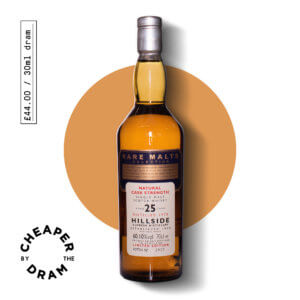 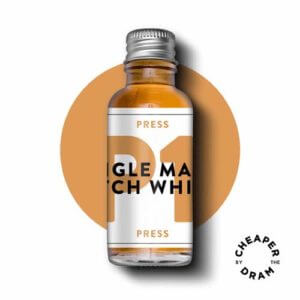